There are many variations of passages of Lorem Ipsum available, but the majority have suffered alteration in some form, by injected humour, or randomised words which don't look even believable genera on the Internet tend to repeat predefined chunks as necessary making Internet.

You Will Have What You Say!

Breaking Limits Greetings to you in the precious name of  our LORD Jesus Christ.  It appears the 21-day prayer and fasting went by really fast and I want to congratulate every one of us that took part in that spiritual exercise.

In the course of the last 21 days, a good number of us have had encounters and testimonies of supernatural intervention and answered prayers. For the rest of us, God is still at work and our testimonies are about to tingle the ears of all that hear them. It is for all of us in this category that I bring a word of exhortation this week.

Our words have power: they can hurt and they can bless. However, the power of our words reaches beyond the impact they make on our emotions. Our words have supernatural power - the power that is able to change circumstances and shapes destinies.

In Numbers 14, the Bible records a report of the 12 spies sent by Moses to spy out the Promised Land. Ten of them returned and said unto Moses: "We be not able to go up against the people; for they are stronger than we." Only two of them (Joshua and Caleb) believed that they were well able to possess the land.

Interestingly, God had already told them that the land was theirs and they could go and possess it so it wasn't about them or about what they could do, but what they could do with God. Their fear was so strong that the Bible records that the whole congregation began to cry, mourn and fear that they would die in the wilderness.

At the conclusion of this story, the ones who said they would die in the wilderness got what they said, and the ones that said we are able and let us go up at once and possess it got what they said.
God does answer prayers so It doesn’t matter how bad it looks, or how supposedly late your answers seems to be forth-coming; including how long that challenge has been, God has the final say. He is never late and it’s not over until God says so. Shake off the self-pity. Shake off the disappointment. Like Abraham, refuse to "stagger" (Romans 4:20), align yourself with His word, declare His promises over your life and get ready to testify.

God is too faithful to fail and I guarantee that you are next in line for a testimony. 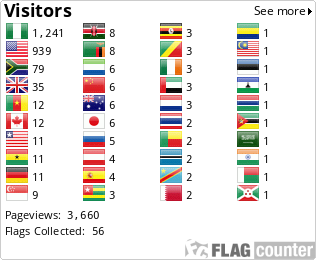 Welcome Onboard the home of the Sent Word, the Right Word and the Word in Season. It is finally your turn for a change of story! Jesus Christ the same yesterday, and to day, and for ever. ▶ [Heb.13:8 (KJV)]

Breaking Limits greetings in Jesus’ name.
We truly serve a God of time and season, who makes all things beautiful in His time. Without any doubt, the year 2019 was an awesome year for. . .